I don’t remember the exact date and I can’t find the needed data quickly (even Wikipedia fails me), but somewhere around the 24th of March of 1999, I was standing in the lecture hall at my university and opened up our bi-annual students assembly (I was part of the students council at the time) with a few, probably very incoherent words about what just started to happen in the Kosovo region. For the first time since the end of the second world war, german military forces were allowed to shoot enemy combatants on foreign ground. The german air forces were part of what was called OAF (Operation Allied Forces), an operation against what at that time was called Federal Republic Of Yugoslavia, which consisted of Serbia and Montenegro.

I’m not interested in discussing the details of this conflict and to be honest, I had to read up on it on Wikipedia because I seem to have forgotten most of the details. But I do remember that for me as a german citizen, it felt like the end of an era: Post-WWII Germany crossed a line I personally hoped would never again be crossed. Under a left/green government no less. 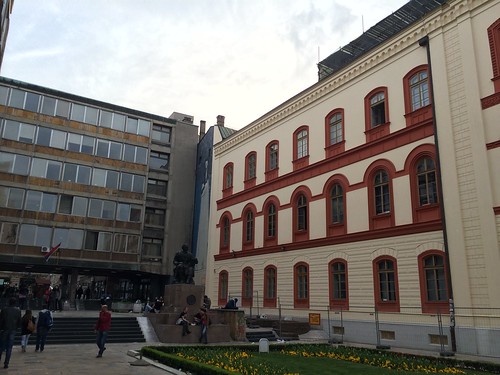 I’m writing this, because last wednesday I boarded a plane in Vienna heading for Belgrade. And as our lovely AirBnB host carefully drove us through the traffic, she pointed out various army buildings that took hits during OFA. Due to the chronic underfunding of the city, these sites are either unchanged since the attacks or poorly disguised with huge textile billboards.

But as we drove into Belgrade and as we started to explore the city later that day, one thing was clear from the very start: If people in Belgrade had any sentiments or grudges against us, they were very good at hiding them. There’s a certain type of directness you either find annoying or amusing for foreigners (Best example: Benjamin tried his newly acquired knowledge about the serbian “hvala”, which means thank you on someone and she laughed and simply said “keep trying”), but almost every one we met was friendly and helpful. The human ability to forget and heal still amazes me to no end.

We came to Belgrade for resonate.io, a conference slash festival at the interface between arts and technology. My partner in crime, Benjamin, did a pretty good job of summarising our resonate.io experience and I can’t really add a lot to that.

After resonate.io we joined our two girlfriends and continued to explore the city. We saw a tesla coil do it’s magic, we crossed rivers, we hunted down restrooms in the central bus station, we ate a lot of meat, we fed Njamnjams, we walked parks, we drank coffee and we walked past bombed buildings.

And after that we came home to our great AirBnB apartment and basically just fell into our beds and slept.

What’s left after coming home with a really bad cold (and having to cancel two awesome events in 10 days. Also the reason why this post is so late) from one of the most impressive cities I’ve visited in a long time (Well. Jerusalem. Hard to beat that one, to be honest)?

Belgrade is a mix. A totally eclectic mix of young and old. Fashioned and stone cold ugly. Relaxed and hectic (Mostly relaxed, though). Modern and hopelessly behind. A super modern Café slash Disco on a ship serving delicious food and drinks next to a sunken boat that probably was out of fashion 20 years ago. Belgrade is all of that. It deeply impressed me. Us. We’ll probably all be back. Thanks for being so nice to us. Thanks for being so exhausting. Please keep your viruses to yourself next time, though (I’m not even sure we didn’t bring them ourselves).

(Go to flickr to see a quickly cobbled together photoset).